Being a sports fan, I’m a pretty big sucker for a good sports film. Fitting in with this year’s festival theme of “Moving Pictures,” there were several films programmed as part of an “inspirational sports movies” theme. Movies about sports are great because most competitions have a clear distinction between winner and loser, and nothing is inspirational than seeing the little guy or the underdog come in first.

Saturday morning was a tough-choice block for me in that there was a special Vitaphone presentation over at the Egyptian, which was very popular, but it was programmed opposite one of my favorite films, Field of Dreams (dir. Phil Alden Robinson). Out of the sports I personally follow on a regular basis, baseball is right up there with horseracing, and I usually watch Field of Dreams at least once a year. So the chance to see it on the big screen with an audience was too much to resist.

The film is based on a novel by W.P. Kinsella called Shoeless Joe, which was published in 1982. The movie version, released in 1989, stars Kevin Costner as Ray Kinsella, a Berkeley educated ex-hippie-turned-farmer living in Iowa with his wife Annie (Amy Madigan) and their young daughter, Karin (Gaby Hoffman). Ray details his childhood growing up with his single father, John (Dwier Brown), a difficult relationship held together by a mutual love of baseball. While working out in the cornfields, Ray hears a mysterious voice that announces, “If you build it, he will come,” while showing him the vision of a baseball diamond laid out in the corn. With Annie’s blessing, Ray plows under a section of his crop to build the playing field, all the while regaling Karin with the history of the 1919 Black Sox and their start player, Shoeless Joe Jackson.

With the entire town thinking he’s lost his mind, and facing a financial crisis due to the lack of crop production from the loss of acreage taken up by the field, Ray starts to fall into debt on the farm. After months of nothing, Karin notices a lone figure walking around the field one night. Ray recognized the man as a young Shoeless Joe, and the two exchange batting practice. Shoeless Joe marvels at the field, and asks if he can bring others with him when he returns.

The rest of the film serves as a kind of mythical journey as Ray is prompted by the voice to cross the country and seek out reclusive writer Terence Mann (James Earl Jones) and later a little-known player named Archibald “Moonlight” Graham (Burt Lancaster), who only played in one major league game before retiring to serve as a family doctor in small-town Minnesota. Both have unfinished business to accomplish at the baseball diamond in Ray’s cornfield, and in turn, Ray and his family are able to work through their struggles and lost dreams. 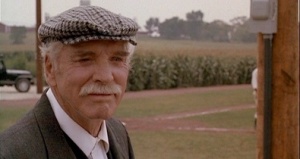 I’m at heart a helpless romantic, and probably a bit of an old soul (at least this is what people tell me all the time with my tastes in everything from movies, sports and music). There is something very romantic about the game of baseball, and perhaps that’s why it seems to translate so well on film. Any fan of the game knows the feeling: you walk through those turnstiles at the stadium and are immediately hit with the smell of hot dogs, popcorn, and fresh cut grass, the sound of the ball hitting that sweet spot of the bat- and you understand that these elements of the game have stayed the same since the beginning. It it is this fundamental feeling that Field of Dreams captures, for the game can be played in grand old stadiums like Fenway Park, or a field carved into the crops of an Iowa farm. Although the film celebrates baseball, it also speaks to the bonds of family, and especially those of father and son, and father and daughter. Ray is driven to take a leap of faith because he fears he will turn out like his father, and in the end, it’s this gamble that allows him to build a future with his family while finally reconnecting with the man he had bitterly severed ties with before.

Although the audience for this screening was fairly light, I noticed many fathers who had brought their children with them to see the film. And like I do every time I see this movie, I had tears streaming down my face continuously for about the last half an hour. There are several very moving sequences and performances to me in this film. One concerns Burt Lancaster, perfectly cast as the elderly Moonlight Graham. Graham has lived a fulfilling life as a small town doctor, happily married to wife Alicia, whom he talks about fondly. As someone who during the peak of his acting career I associate with an almost relentlessly intense presence onscreen, it is somewhat fitting to see Lancaster in his final film role as the kindly Graham, appearing and departing into the mist.  I get chills when James Earl Jones’ Terence Mann recites the now famous speech to Ray about how the “people will come” to see baseball played at their field, that “this field, this game, is a part of our past, Ray. It reminds us of all that once was good, and it could be again.”

Lastly, the ending of the film gets everyone, but I won’t spoil it here in case some have yet to see it. I’ll say I wasn’t the only one crying in the theater at 9am on a Saturday morning. TCMFF presented Field of Dreams at the TCL Chinese IMAX Theater in a wonderful-looking DCP presentation. I grew up in Iowa for a few years before moving to Colorado, and I distinctly remember my 6-year-old self vowing to never live there again because there was nothing but corn for miles and it smelled like pigs. I mention this because John Lindley’s beautiful cinematography is a direct rebuttal to my narrow childhood opinions of Iowa, and paints the Kinsella farm as the perfect place for this fantasy to play out, bringing out the simple beauty of its heartland setting. If baseball is “America’s game,” then where better to set this story than the expansive sweep of green cornfields and painted sunsets of the Midwest?

Although this was a “newer” film by many classic film fan’s standards, I was very appreciative of the chance to see this on the big screen, and like many other screenings throughout the festival, it was wonderful to see families sharing classic film experiences with children probably seeing those films for the first time. I think Field of Dreams also captures the essence that I love from so many of the classical Hollywood films in that it’s not afraid to craft a good story, even if it’s totally fantastical. It is a film that on paper sounds like it shouldn’t work, but somehow does, and offers its audience a really magical experience that celebrates family, dreams and the American pastime.