This entry is part of The Classic Movie Blog Association’s Fabulous Films of the 1940s blogathon.

The title of John Huston’s Key Largo perhaps suggests a rousing adventure on the southern island, yet in reality the film presents itself more as an intimate character study than anything else. In stars Humphrey Bogart, Edward G. Robinson and Lauren Bacall, Huston has strong faces that he uses to his full advantage. Adapted from a Broadway play of the same name, the action stays mostly limited to interiors, giving the film a very theatrical feel. Except for the references to the hurricane weather that traps the characters inside, it isn’t until the final gun battle out at sea that the film makes full use of its location. In some ways, this story could’ve taken place anywhere.

But the film does open in Key Largo, one of the islands off the southern coast of Florida. As a bus comes down the highway connecting the island to Miami, we meet Frank McCloud (Humphrey Bogart), a former Major in the Army. He heads to the Hotel Largo looking for the proprietor, James Temple (Lionel Barrymore). Upon his arrival, he’s greeted by a small group of shady characters, but otherwise the hotel seems empty. After meeting Temple and his daughter, Nora (Lauren Bacall), McCloud learns that hotel is closed for the season, but the group of guests offered a sum they couldn’t refuse in order to stay for their fishing trip. McCloud served with Temple’s son, George, in Italy, and is welcomed to stay by Temple and Nora, George’s widow. On the horizon, a major hurricane is brewing.

At the same time, two Seminole brothers, the Osceolas, escaped from jail and are being sought out by the local sheriff and his deputy, Sawyer. Temple is close to some of the local Seminoles, inviting them into the hotel during the hurricanes. The police know he is friendly with the Osceolas, and make a stop by the hotel to see if they’ve been there. Temple hasn’t seen them, but says if they do come by he will use his influence to convince the brothers to turn themselves in. Shortly after, the Seminole group rows into the docks at the hotel looking for shelter, and Temple and the Osceolas brothers decide that since they were in for minor crimes, it’s probably best to just turn themselves in after the storm.

Within the fishing vacation group are Curly (Thomas Gomez), Angel (Dan Seymour), Toots (Harry Lewis), Ralph (William Haade), and Gaye Dawn (Clare Trevor). It is apparent that Gaye has a drinking problem, and the rest seem tight-lipped about their stay in Key Largo. There is a sixth member of their group, but it is mentioned that he doesn’t leave his room.

As the storm rolls in, the men in the group pull guns on Temple, Nora and Frank. It’s revealed that their sixth man is gangster Johnny Rocco (Edward G. Robinson), who had been exiled from the US for eight years. Rocco had been living in Cuba, and is up in the Keys to make a deal with an American contact. Rocco is a bitter man, believing he will rise back to prominence. He also holds Gaye’s dependence on alcohol over her head. 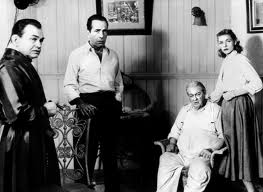 Robinson, Bogart, Barrymore and Bacall. What a cast!

The gang reveals that they have the deputy, Sawyer, who was caught looking around the hotel trying to find the Osceola brothers. Frank is given the chance to shot Rocco in a gun duel but refuses. Sawyer takes the gun and tries to escape but the firearm is unloaded and Rocco kills him. The action shows Frank’s seeming cowardice to do the right thing in favor of non-violence and self-preservation.

As the storm reaches a head, the Seminoles who usually find shelter with Temple inside the hotel knock to get in, and are locked out by Rocco’s gang. Two members of the gang are sent out to sea to dump Sawyer’s body into the ocean. The whole time Rocco’s gang is holding the Temples and Frank hostage, Gaye is begging for a drink, which Rocco refuses her. He finally relents, saying that if she sings a song, he’ll allow her a drink. Clearly not wanting to, Gaye reminisces about the glamor of her career as a nightclub singer, which is in contrast to her sorry state now. She gives a raw performance of “Moanin’ Low,” and then is a refused the promised alcohol by Rocco. Frank can’t stand to see her treated this way, and grabs her the drink. Nora notices that he does have the capacity for heroism, something she suspected right after she met him.

After the storm passes, the sheriff comes by the hotel looking for Sawyer, having gotten a phone call from him earlier. Rocco meets him and tell him that Sawyer wasn’t there. As the sheriff pulls out of the driveway, he notices Sawyer’s body, which was washed back on shore during the storm. He then sees the group of Seminoles heading back to their boats, including the Osceola brothers. Believing that Sawyer knew the brothers were at the hotel and that he was murdered by them, the sheriff kills both men.

Rocco notices that his yacht captain pulled away during the storm even through he was warned not to, thus leaving the gang stranded. After completing the deal with his contact, Rocco enlists Frank to take him back to Cuba on the hotel’s small boat. Gaye manages to get Rocco’s gun off of him and gives it to Frank, telling him his best chance is to run under cover of darkness when they head out to the boat. To both the Temple’s and Gaye’s surprise, Frank gets on the boat with the gang and doesn’t try to run.

While out at sea, Frank cleverly plans and takes out Rocco’s crew one by one. He then sets back towards the hotel. Back at the hotel, the sheriff learns of the whole situation with Rocco and laments killing the Osceola brothers. The film ends with Nora’s joy at hearing that Frank is returning.

As mentioned at the beginning, Key Largo is an interesting movie because of its intimacy. Huston chooses to film his characters in close-ups, letting their faces tell the story. Many times there are shots where it’s just one group making eyes at the other, which helps to build the suspense. It’s a film that could’ve very well have been just a filmed stage performance because it doesn’t require the expansive environment of other stories, but Huston’s framing choices elevate it to a level that could only be achieved in film. Of course those faces are strong ones in their own right, and Bogie, Robinson and Bacall are all wonderful in their roles. I thought Robinson, older and bigger than in his younger days, really fit into this role. It was like he was the gangster of his younger days but now his stature on film and his physicality had elevated him to that larger-than-life gangster that I had always imagined. Claire Trevor actually won the Supporting Actress Academy Award for her portrayal of Gaye, and she stands out just as much as the heavyweights all around her. 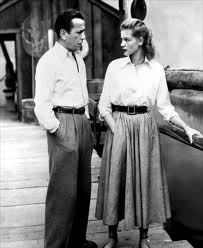 This was Bogart and Bacall’s last film together, and while they don’t get to share in the same steamy romantic scenes as in previous films, they’re still so much fun to watch on screen together. It’s kind of cheesy, but even when he touches her hair or they share a look it’s magical. On another fun note, the boat that Frank takes the gang out on is named the Santana, just like Bogie’s real yacht.

Overall, I enjoyed this film. I really knew nothing about it, so I guess I was expecting a more action-packed noir, but I really liked the chance to just hang out with these characters. I do think the way this film is put together is really amazing as well, so it was a pleasure to watch.